Utah One of the Leading States for Advanced Industries Employment 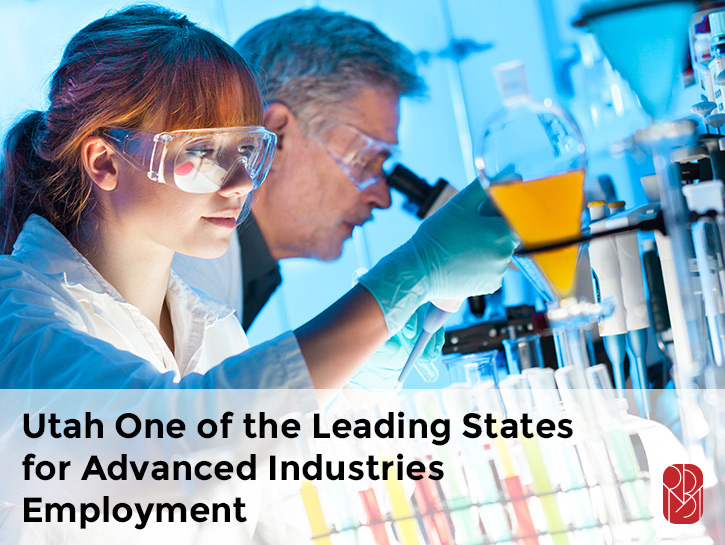 A recently released report from the Brookings Institution entitled “America’s Advanced Industries: What They Are, Where They Are, and Why They Matter” highlights the strength and diversity of Utah’s economy. The report defines an industry as an “advanced industry” if it meets two criteria: 1) the industry spends heavily in research and development (R&D spending per worker in the 80th percentile or higher or more than $450 per worker); and 2) the industry employs workers with a high degree of STEM (science, technology, engineering, and math) knowledge above the national average of 21% of all workers. Using these criteria, the authors of the report identified 50 industries that invest heavily in research and development and employ highly skilled workers. These 50 industries include manufacturers, energy providers and service providers in a variety of industries, such as aerospace products and parts, motor vehicle-related manufacturing, computers and peripheral equipment, chemical products, energy industries, computer systems design, data processing and hosting, and software publishers. Many of these industries are developing “disruptive technologies” that are redefining both the workplace and our daily lives.

The Executive Summary and the Full Report, along with interactive data and support tables, are available at http://www.brookings.edu/research/reports2/2015/02/03-advanced-industries#/M10420. Summaries of employment, output, and growth for the State of Utah and the Salt Lake City, Provo-Orem, and Ogden-Clearfield metropolitan areas are attached.

Steven Bergman is a Shareholder and Attorney with the law firm of RBMN, specializing in business law, real estate law, and appeals.

Protecting Your Intellectual Property in a Distribution Contract