Robinson v. Taylor: The Inadmissibility of a Physician’s Prior Unrelated Felony Convictions Where Credibility is Not at Issue 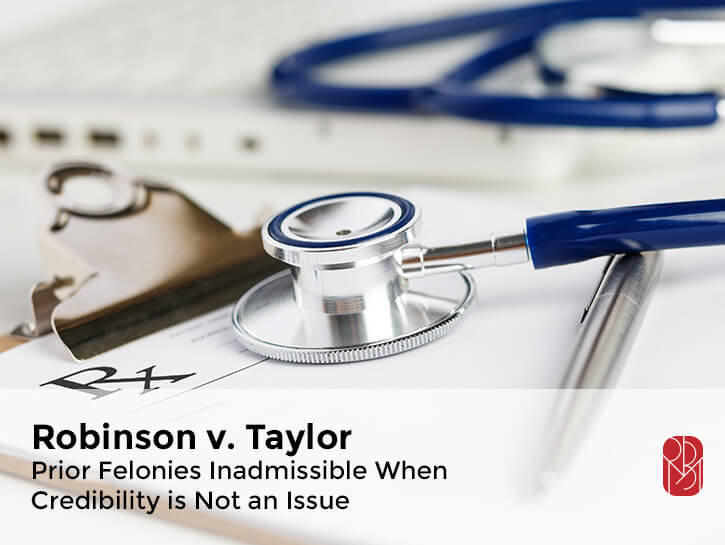 In Robinson, the children of the Brad Robinson (“Mr. Robinson”) brought a wrongful death/medical malpractice lawsuit against a physician, claiming that the prescribing physician negligently prescribed methadone, which lead to their father’s death. The doctor testified during his deposition that he issued a written prescription to Mr. Robinson for a daily dosage of 140 milligrams of methadone. However, the doctor also testified that he had given Mr. Robinson oral dosing instructions for the methadone that differed from those reflected in the written prescription. Approximately one week after the prescription was issued, Mr. Robinson was found dead in his home. The medical examiner concluded that Mr. Robinson’s cause of death was “acute methadone toxicity.”

After Mr. Robinson’s death, but prior to trial in the malpractice action, the prescribing doctor was charged under federal law in an unrelated action for illegally distributing a controlled substance. The doctor pled guilty to one felony drug charge and was sentenced to prison. Due to his incarceration, the doctor was unable to attend the civil trial and his deposition transcript was used in lieu of his trial testimony.

During trial, the Robinson children sought to introduce evidence of the doctor’s felony drug conviction in order to impeach his credibility. The trial court concluded that evidence of the conviction was admissible under rules 608 and 609 of the Utah Rules of Evidence because it reasoned that the doctor’s credibility was at issue and the conviction was probative of the doctor’s character for truthfulness. Following this ruling, the plaintiffs subsequently read portions of the doctor’s deposition describing the events surrounding his felony conviction to the jury and discussed the felony conviction in closing. The jury ultimately awarded the Robinson children over $3 million in general damages and $300,000 in punitive damages.

On appeal, the Utah Supreme Court concluded that the trial court abused its discretion when it admitted evidence of the felony conviction because the doctor’s credibility was not at issue and the prejudicial effect of the criminal conviction evidence substantially outweighed its probative value.

Second, the court held that the felony conviction was not admissible under rule 609(a)(2) of the Utah Rules of Evidence because the underlying elements of the felony drug charge did not require proving a dishonest act or a false statement. Rule 609(a)(2) provides that “crimes involving a statutory offense that require proving a dishonest act or false statement as an element of the crime are to be automatically admitted into evidence.” The trial court reasoned that the felony conviction must be automatically admitted under this rule because “writing a prescription under the false pretense of the existence of a doctor-patient relationship . . . pertains to a crime involving a dishonest act or false statement.” However, the Utah Supreme Court ruled that this was reversible error because “[w]hile it is possible that distributing a controlled substance may be done in a deceitful manner, the offense for which [the doctor] was convicted . . . does not include elements of a dishonest act or false statement as part of the statutory offense. . . . Accordingly, admission of [the doctor’s] prior conviction of a narcotics violation was improper under rule 609(a)(2).”

Finally, the court concluded that the felony conviction was not admissible under rule 609(a)(1)(A) of the Utah Rules of Evidence because the doctor’s credibility was not at issue and the danger of unfair prejudice as a result of the admission substantially outweighed any probative value that the evidence of the conviction would provide. “[W]hether [the doctor] gave the oral dosing instruction to Mr. Robinson was not a ‘consequential fact’” and “only a tangential issue” because “the Robinsons argued that [the doctor] was negligent regardless of which dosing instructions were given.” As such, “whether [the doctor] was telling the truth about the oral dosing instructions was inconsequential to the case and, therefore, there was no real need to impeach [the doctor’s] credibility.”

Furthermore, the court held that the admission of the felony conviction was unfairly prejudicial because both the “prior conviction and the negligence claims at issue here involve questionable prescriptions.” Where the factual allegations were so similar, the jury was more likely to “improperly infer[] from the conviction that [the doctor] was willing to prescribe dangerous medications without exercising proper diligence” or believe that the doctor had a “weakness of not being able to say ‘no’ to demanding patients.” “In short, the inferences to be drawn from the evidence of [the] prior conviction may have led the jury to conclude that [the doctor] should be punished, regardless of his liability in this particular case. This risk ‘creat[ed] a prejudicial effect that outweighs ordinary relevance” and, therefore, admission of the conviction by the trial court was an abuse of discretion.

Samantha Wilcox is an Associate Attorney with RBMN, with a background in Healthcare Law and Insurance Litigation.

What is a Copyright and Why Should I Protect It?

What is a trademark?
Scroll to top