An Epic Battle of Blockbuster Proportions: Part II What is Genericide in Trademark Law and How Do I Avoid It? 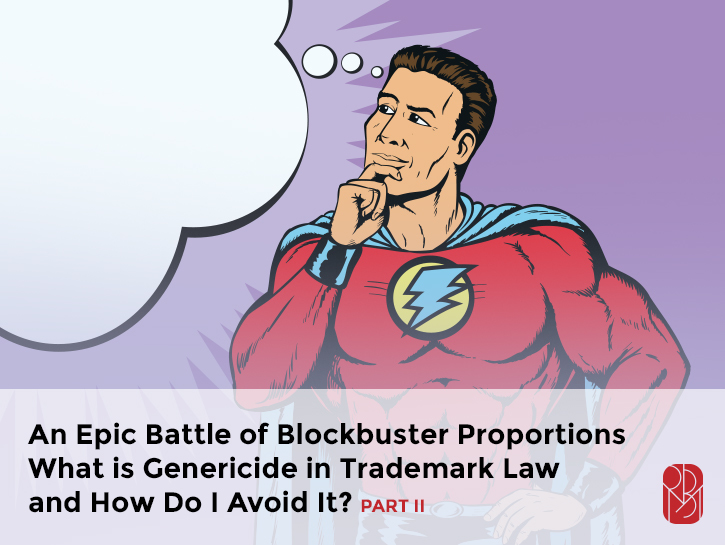 In our last action-packed blog posting, we discussed the trademark battle between San Diego’s Comic-Con and Salt Lake City’s Comic Con. The two parties had traded (symbolic) powerhouse blows in a California federal court over whether Salt Lake City’s use of the term “Comic Con” (without a hyphen) infringed on San Diego’s registered trademark for “Comic-Con” (with a hyphen). Organizers of the San Diego event argued that Salt Lake City is free-riding on the term in order to confuse the public into thinking the two events are related. The organizers of the Salt Lake City event argued that the term had become genercized over time due to widespread use by other similar conventions and petitioned the United States Patent and Trademark Office to cancel the San Diego group’s trademark.

With that preliminary explanation out of the way (those of you who are interested in reading more about the dispute can go here for our prior blog entry, we now turn to this week’s topic and the question of how to further define genericide and, finally, the important issue of avoiding genericide in your trademarks.

In the words of the United States Patent and Trademark Office, “Generic terms are terms that the relevant purchasing public understanding as the common or class names for the goods or services.” Generic terms (e.g., “detergent”) can never serve as registered trademarks because they do not identify the source of the product or service, which is a key requirement of trademark registration.

What Aspirin, Escalators and Cellophane Have in Common

A number of common terms started out as registered trademarks but became generic over time. Examples include aspirin, escalator, Hoagie (as in sandwiches), and shredded wheat (as in breakfast cereal). If you do not carefully monitor the use of your mark and allow it to be used to describe a particular type of product (for example, cellophane), rather than to designate you as the origin, you run a very real risk of that term becoming generic and losing your rights.

There are a number of actions a trademark owner can and should take to safeguard its trademark. We’ve included a couple below, but there are others that you should adopt to protect your trademark rights.

And returning to our original subject, what about the battle between Comic-Con and Comic Con? In early January, Salt Lake’s Comic Con filed a motion for a new trial, arguing that the widespread use of the term “Comic Con,” by almost 100 events across the country had made the “Comic-Con” trademark generic.

And so the epic battle over genericide continues. We’ll keep you apprised of any further developments.

Barry Scholl is a shareholder at the law firm of Richards Brandt Miller Nelson, whose practice specializes in business, including trademark, copyright, trade secret protection, contract negotiation and drafting, nonprofit law, and real property. He can be reached at 801-531-2000.

Deferred Action for Childhood Arrivals – Where are we now?

Law Is Stranger Than Fiction | Episode 5 Squirrel
Scroll to top