The Future of Optional Practical Training Extensions For Non-U.S. Citizens Who Receive Degrees in the Fields of Science, Technology, Engineering, or Mathematics 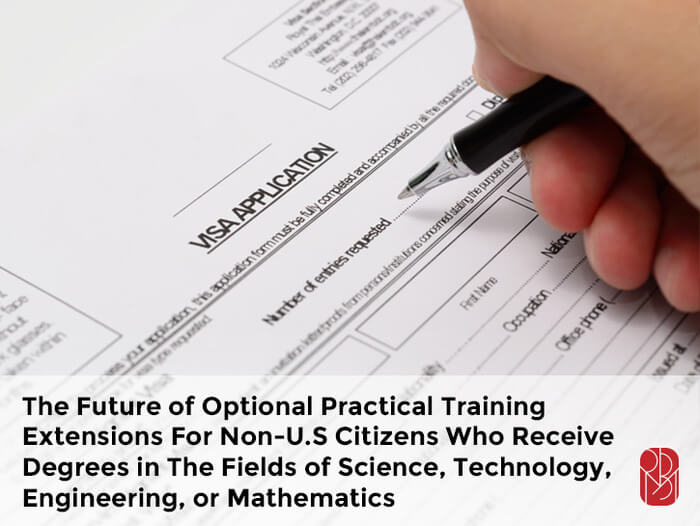 One of the most enduring concerns about the current U.S. immigration law is the difficult and lengthy process qualified non-U.S. citizen workers face in obtaining work visas. In an attempt to provide a bridge between graduation and obtaining a work visa for qualified non-U.S. citizens who graduated from American institutions, the U.S. Department of Homeland Security (“DHS”) established the Optional Practical Training (“OPT”) program to allow foreign nationals who study at United States institutions of higher education on F-1 student visas to work in the United States for up to 12 months during and/or after their education. In 2008, DHS established a new policy allowing students who receive degrees in a science, technology, engineering, or mathematics (“STEM”) field to apply for a 17-month extension of OPT. This allowed non-U.S. citizen STEM workers to continue working in the United States for up to 29 months while waiting for an approved, longer term employment visa.

The OPT program was thrown into question when the Washington Alliance of Technology Workers (“WashTech”), a union representing U.S. citizen technology workers, filed a lawsuit against DHS, claiming that the OPT program circumvented labor rights protected by the H-1B visa program for temporary employment, and that the interim final rule that established the 17-month STEM extension program was procedurally invalid. On August 12, 2015, the U.S. District Court for the District of Columbia ruled that DHS did not follow proper notice-and-comment procedures for the April 2008 rule. Washington Alliance of Technology Workers v. U.S. Department of Homeland Security, Civil Action No. 14-529, 2015 WL 5455331 (D.D.C. August 12, 2015). The court revoked the 17-month STEM extension program as of February 12, 2016, giving DHS time to propose and establish a new rule. A subsequent motion to dismiss filed by the government was granted in part and denied in part, narrowing WashTech’s claims to the 17-month STEM extension program rather than the OPT program as a whole.

On October 19, 2015, DHS published a proposed rule to replace the 17-month STEM extension. The proposed rule also increased the STEM extension from 17 months to 24 months. In other words, if approved, non-U.S. citizen STEM workers could have valid work authorization for a total of 36 months, or three years, after graduation from an American university or college. The proposed rule also contains provisions that would grant relief to workers who “run out” of OPT while an employment visa application is pending decision. Pursuant to the Administrative Procedure Act, DHS took public comment on the proposed rule until November 18, 2015. DHS is now working to turn the proposed rule into a final rule as soon as possible in an attempt to avoid any problematic gaps in work authorization.

The results of this litigation and rulemaking process has high stakes for thousands of non-U.S. citizen students, graduates, and their employers who rely on this work authorization. Should the current 17-month extension lapse on February 12 with no new final rule in place, STEM extension workers would need to immediately cease employment. If you are a non-U.S. citizen student or recent graduate, or are an employer utilizing temporary employment visas, please contact our office for advice on how to plan for potential changes in the Optional Practical Training.

The contents of this piece are not legal advice, and this piece does not create an attorney-client relationship. Kristina Ruedas is a Utah Immigration Attorney with RBMN, and can be contacted at (801) 531-2000 or kristina-rudeas@rbmn.com.

Is It a Covenant or a Condition?