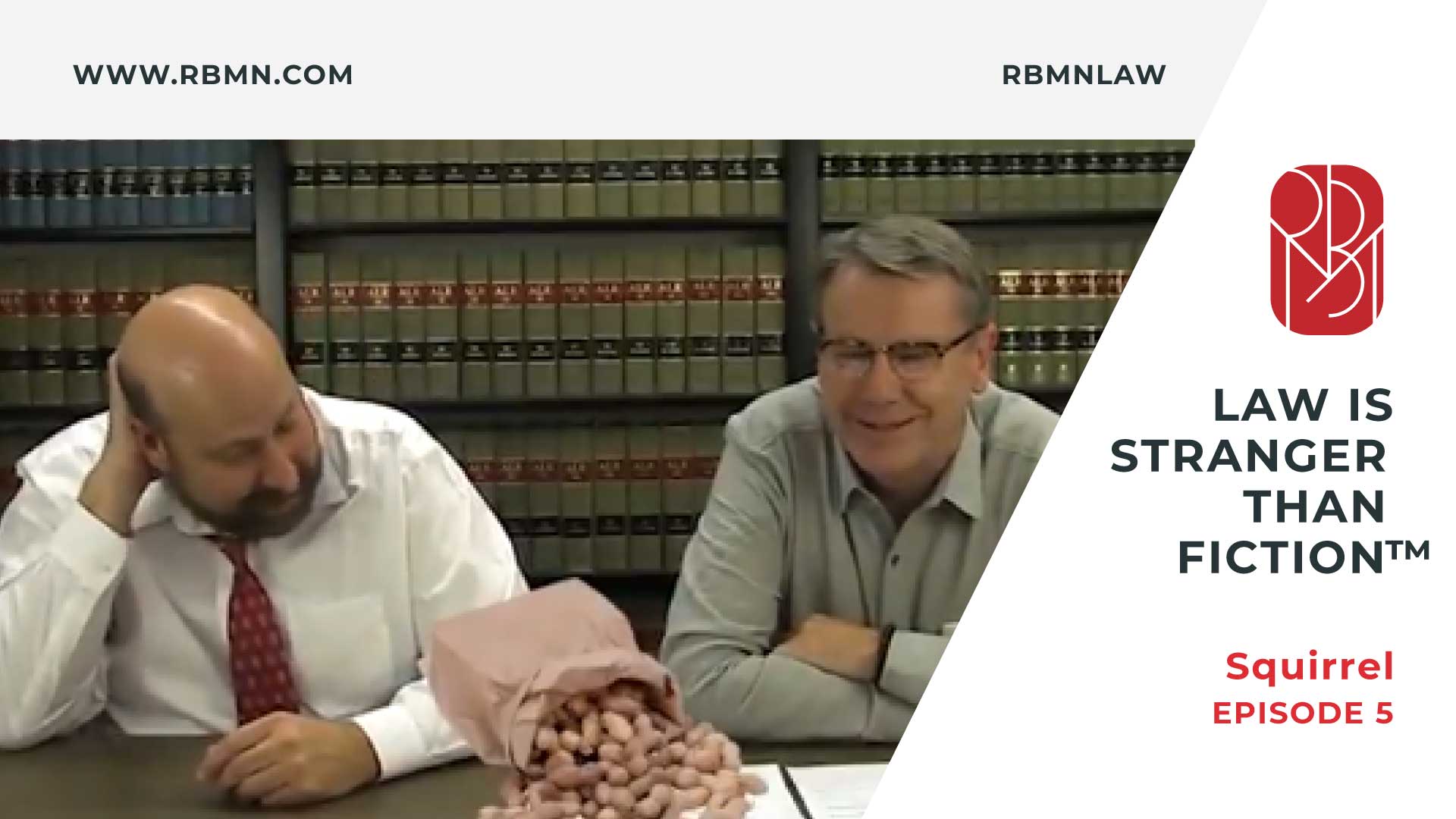 Steven: Good afternoon. I’m Steven Bergman, one of your hosts of Law is Stranger than Fiction.

Barry: And I’m Barry Scholl, the other host.

Barry: Yes this, ironically enough, is a story that comes out of gun barrel Colorado in rural Boulder County.

Steven: Does it involve a weapon?

Barry: It does involve a weapon and it also involves squirrels.

Steven: Does it involve a weapon being used on the squirrels?

Barry: Not on the squirrels. It involves a weapon being used in an altercation over the feeding of squirrels.

Steven: Okay what were these squirrels being fed?

Barry: Pounds of peanuts, according to news reports.

Steven: Okay so what… tell me a little bit more about the story.

Barry: The defendant had been a habit of leaving several pounds of peanuts around the neighborhood to feed area squirrels. Do you want to know why he was feeding area squirrels?

Steven: Well I actually am kind of more concerned about the several pounds of peanuts being left around the neighborhood given the number of kids today with peanut allergies. But, sure, why was he feeding the squirrels?

Barry: Well according to his reports he was feeding squirrels because it made him feel closer to his deceased parents

Steven: Of course, I mean that seems so obvious- we should have thought of that.

Steven: Okay so he’s planting or dropping off pounds of peanuts throughout the area. Was he doing anything else?

Barry: Well he was leaving flyers around the neighborhood, as well. Asking his neighbors not to remove the peanuts and signing them the squirrel guy.

Steven: Okay, so he’s contributing to both litter and potential allergic reactions throughout the neighborhood. What else?

Barry: Well, according to his neighbors, they objected to the squirrels leaving husks around the neighborhood and was involved in a dispute with some of his neighbors over whether or not it was proper to be feeding the squirrels.

Steven: Okay so what happened that led to the altercation in Gun Barrel?

Barry: Well one of his neighbors removed a flyer. Evidently this was one of the neighbors who had been vocal in his criticism of the practice of feeding squirrels. The two became involved in a dispute and the defendant shot his neighbor in the buttock.

Steven: Okay, so now, from what I understand, after he shot his neighbor he then turned himself in, right?

Barry: That is correct.

Steven: Okay and so he gets charged?

Steven: They actually went through a trial. Right, no plea bargain here?

Steven: What was his defense?

Barry: His defense was self defense.

Steven: Okay so he was protecting his non-existent right to drop off peanuts in the area to feed squirrels.

Steven: So how did that self-defense claim work out for the defendant?

Barry: Not so well. The jury convicted him and a judge sentenced him to 12 years in prison for a second degree attempted murder and first degree assault.

Steven: That’s just plain nuts. Okay so I guess he’s cooling his heels somewhere as a guest in the state of Colorado at this point.

Barry: I believe that is correct and I think the judge summed things up when she noted that this was all precipitated by a «petty petty petty dispute over the feeding of squirrels that quite frankly is just so unfortunate.»

Steven: More than a NASCAR race.

Barry: She added that even if the neighbors were mean to the defendant that certainly didn’t give him license to shoot an unarmed man in the back. Actually we believe that was in the buttock.

Steven: Okay so the moral of this story is if you’re going to feed the squirrels maybe leave the weapons at home.

Steven: You don’t want to get to angry there. Hopefully your life does not involve armed altercations in public areas over the feeding of squirrels, but if strange things happen to you and you need an attorney please give the attorneys of Richard Brent Miller Nelson a call and for now this is…

Together: Law is Stranger than Fiction

An Epic Battle of Blockbuster Proportions: Part II What is Genericide in Trademark...